Well 22 drivers made the trip to Deerdale Off Road for the second round of the Tesla Cup an all new series. Slightly dissapointing with the numbers but a nice and steady day was had by all drivers. With only 5 drivers racing in the two tenth classes, I made the decision to put them together to make a simple heat of 5. With only 3 heats a round we made a start at the first round of practice with the heats being receeded by the best 3 consecititve laps. Some very minor adjustments were made because a couple of drivers had difficult marshalling.

However with a maximum of 10 minutes between each race which made the meeting nice and relaxed but yet still progressing at a steady but managable pace. It was funny to see such small cars going around the track but they seemed to manage it ok. After the three practice heats there was a short break while i sorted a issue out with some drivers transponders. I accidentally assigned the wrong transponder to a couple of drivers so that was sorted out before we went any further. Once everything was correct the heats were created and we began the heats roughly 5 minutes afterwards.

The heats ran is an easy straight forward manor. During the quailifying race the weather gods were because mean to us by giving us a very light shower through a couple of races. Not enough to be a problem but enough to give the track a slight damp feel again just enough to get a bit of slide. But then very quicly dried and the grip coming back very quickly.

How ever in the end we saw the TQ spot taken by Tekno Driver Mitchell Booth, Second overall was another Tekno driver Matt Bridge. and third place overall was taken by a new driver to Deerdale Gareth Capper. Tenth side was Alex Bold, Jaco Maree and Elliot Capper

After we had finished qualifying we had a 40 minute break before we started finals.

Finals started with both legs of the 10th Electric finals. 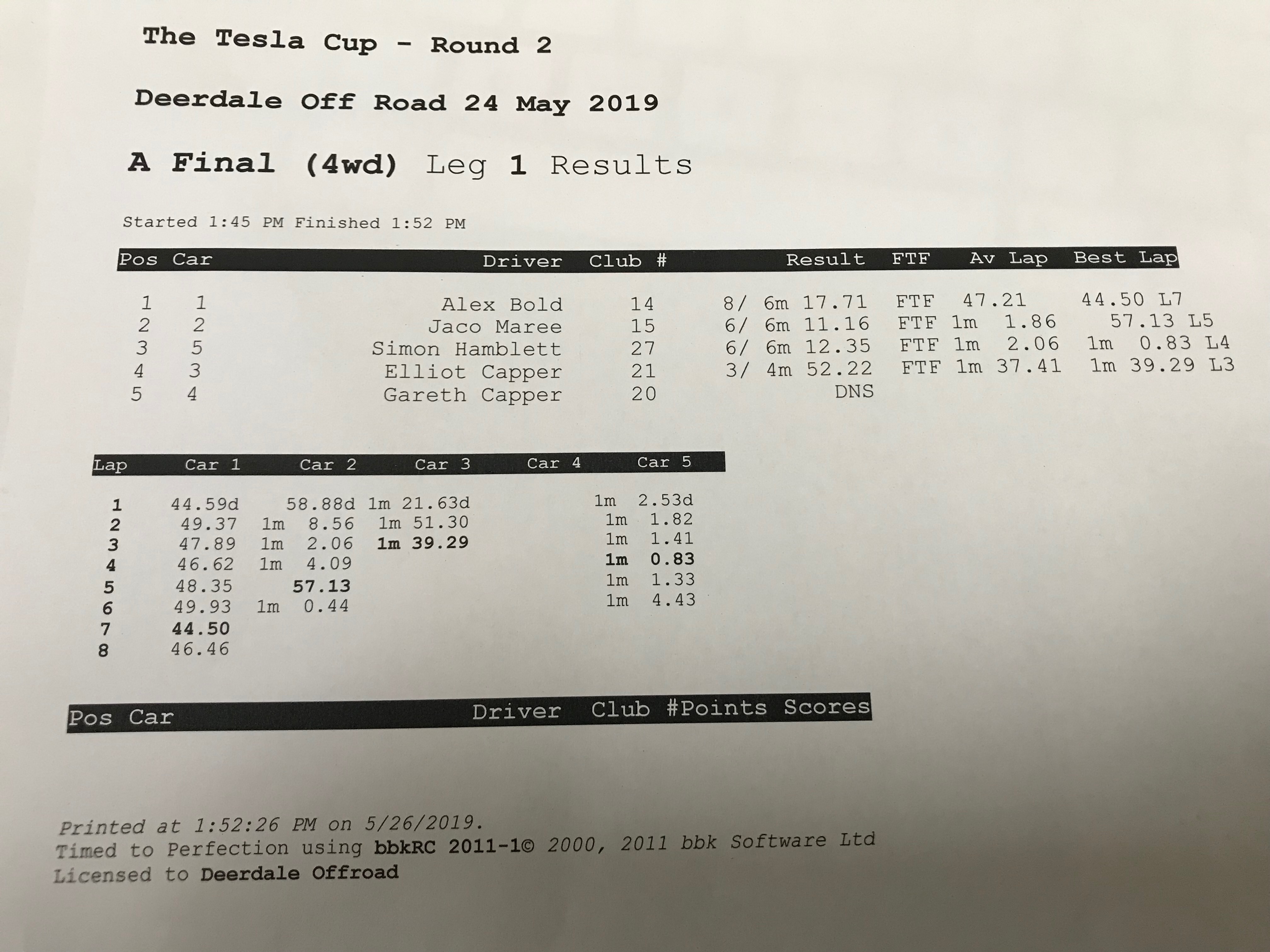 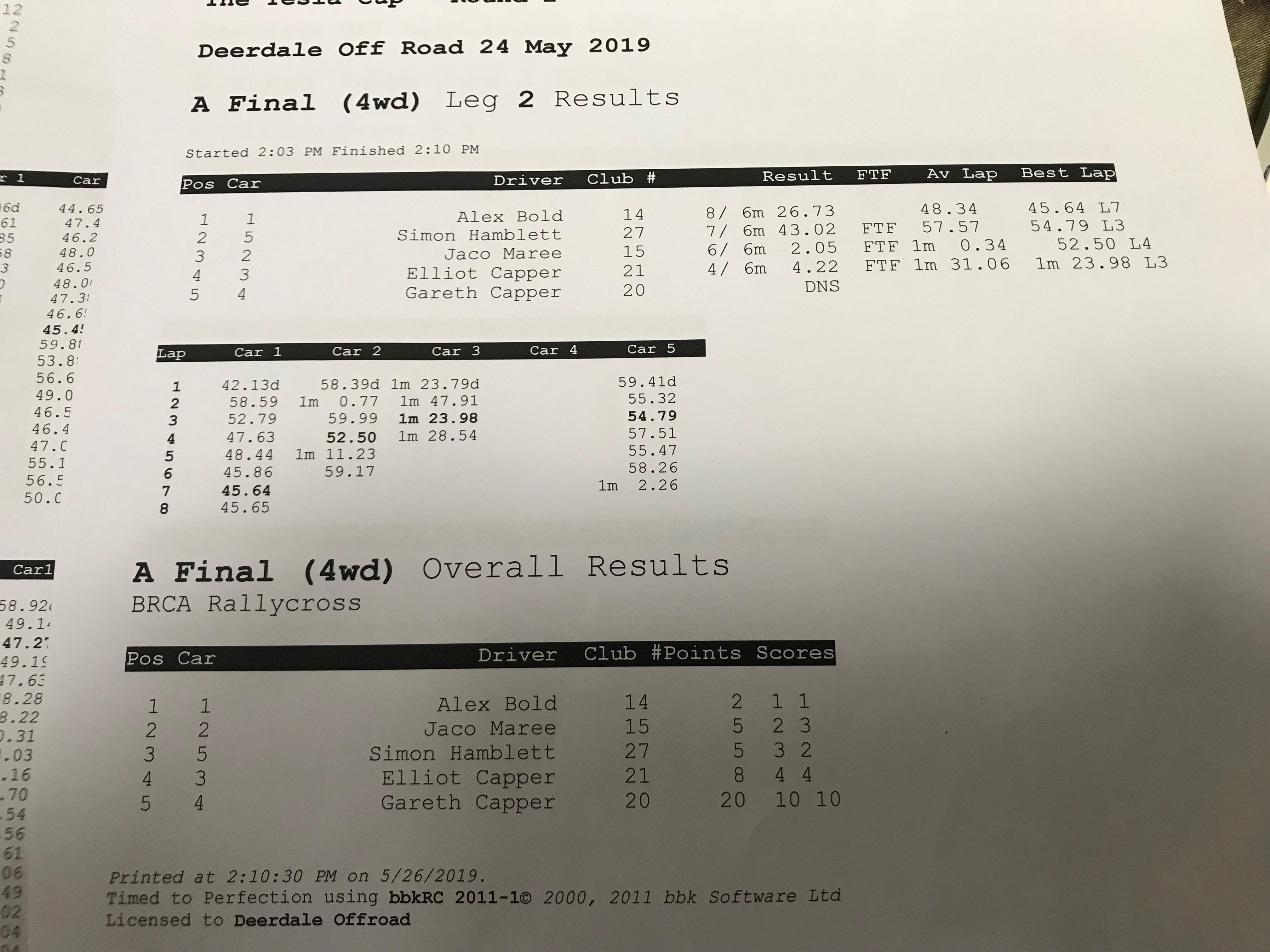 The next race on the line was the E-Buggy B Final. This was a 9 car race and the top 3 bumping up to the A Final. This race ran for 15 minutes. And it was a cracking race. Graham Stocks who is a local driver to Deerdale took the win in this race and Jason Patey who I hadn't seen for years finished in second palce. Mr Ludicrous Lipo himself Kevin Martindale came in second place. Like i said before these drivers were promoted to the A Final which was the next race out. 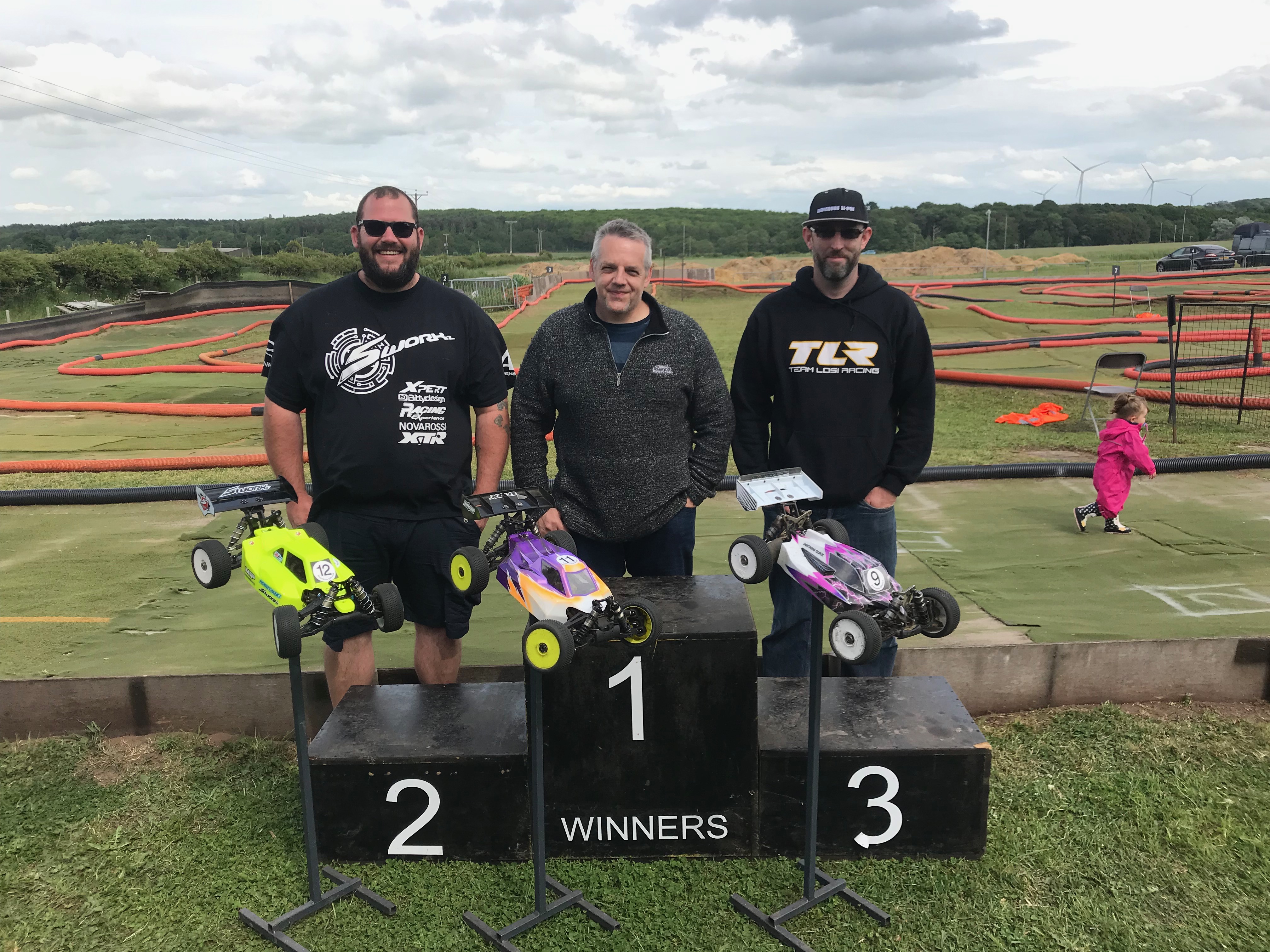 The A Final was also a 15 minute race and contained 13 cars. This was a really good race. great battles throughout and some cracking compeition. After 15 minutes we saw Mitchell Booth take the win finishing on 21 laps. Second place was Gareth Capper who finished on 20 laps. A old face i haven't seen for a while Chris Ely finished in third place on 19 laps. 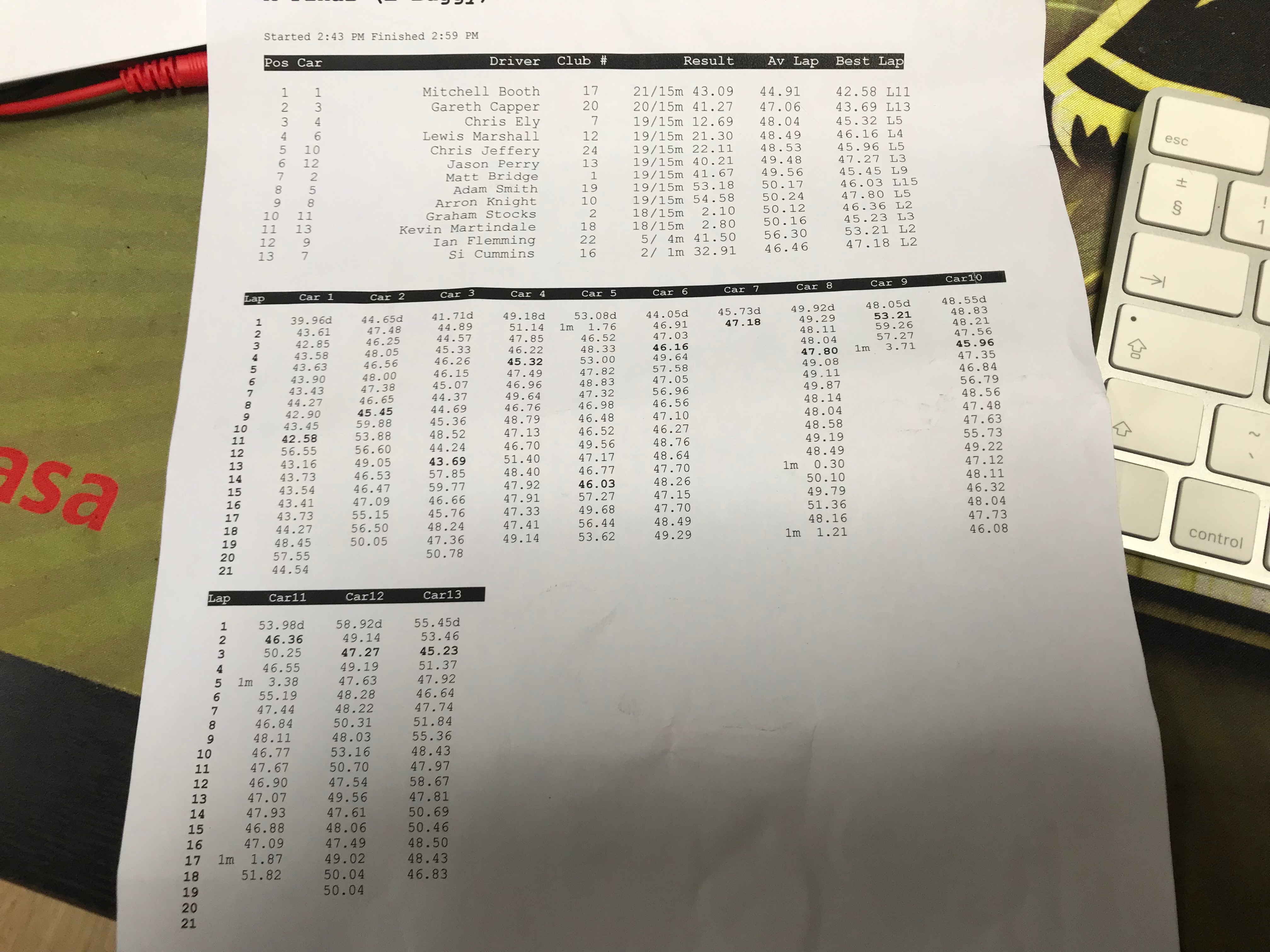 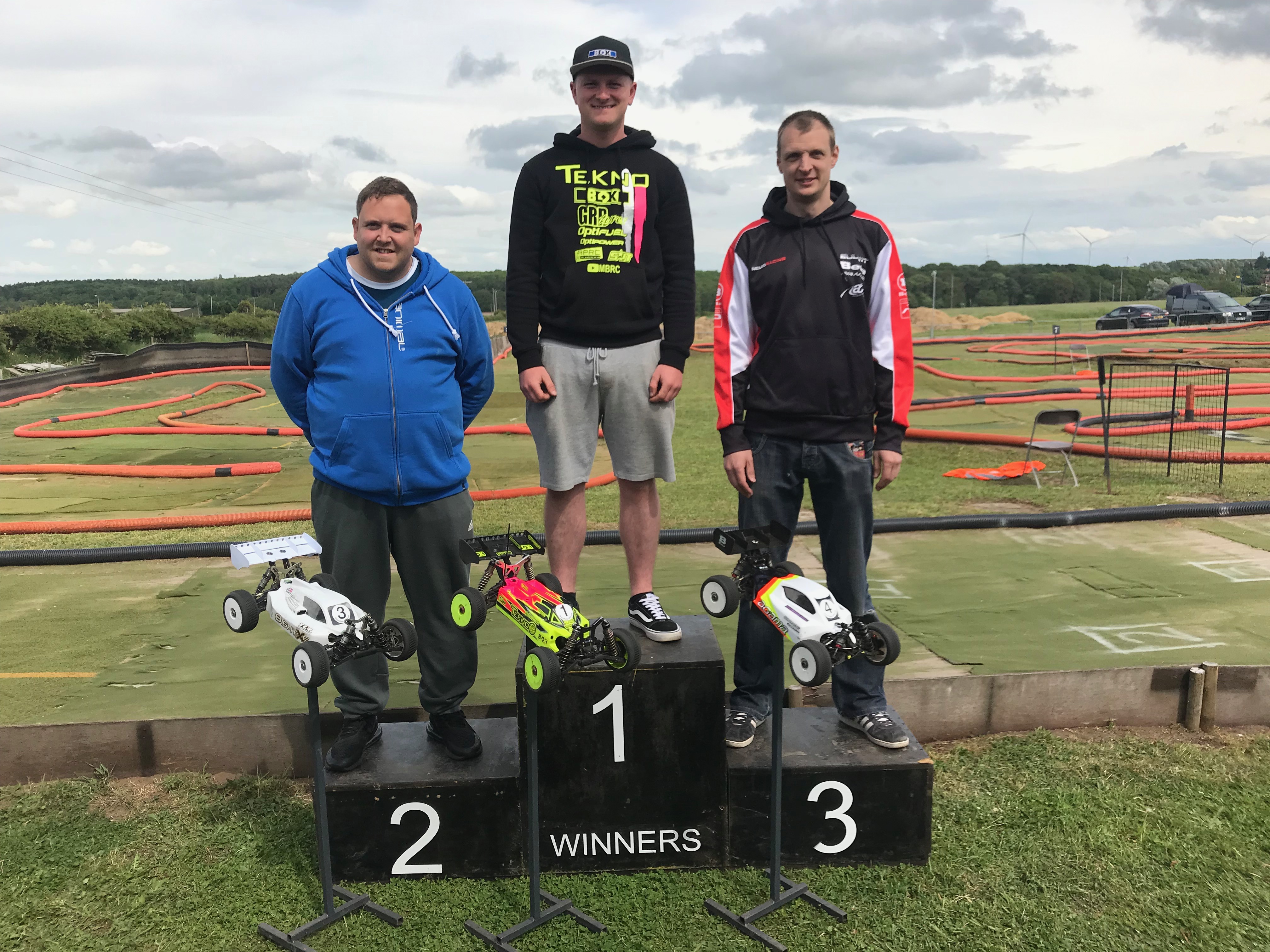 I hope you all enjoyed the meeting, I know I can be relentless sometimes but sometimes you have to be. Massive thanks to William Cahill with Gothic Bites for being with us for the meeting. Lovely hot food as always. We look forward to seeing you at the short course nationals on the 9th June.

Massive thanks to those people who helped marshall the empty points during some of the races.

We have 87 guests and 5 members online